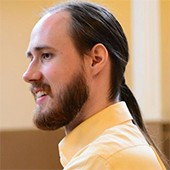 Praised for playing with “a very nice sense of inevitability to the musical intent throughout,” classical guitarist Daniel Lewis is known for very expressive phrasing and a commitment to unique programming, regularly performing music ranging from Renaissance Lute masterpieces to lesser-known 21st century works. Equally at home in many musical styles, Mr. Lewis’ performance schedule regularly includes original compositions on classical guitar, diverse music for the electric guitar in contemporary musical theater, and traditional American folk music on acoustic guitar and banjo. He can be heard in recordings of chamber music by Terry Champlin released by Highwater Music, and by David Loeb on the Vienna Modern Masters label.

As a composer, he has contributed music for projects produced by Tim Corbin Films, scored CCBC’s 2015 production of Bernand Pomerance’s The Elephant Man, as well as frequently writing for River’s Edge Community Church. Mr. Lewis holds a Master’s Degree from Mannes College the New School for Music and is currently on the music faculty of the Community College of Baltimore County, where he directs the Music Theory and Ear Training sequence. Professionally, Mr. Lewis has been published in Soundboard magazine, presented at national conferences such as Innovations and Faculty of the Future, and serves as Membership Director for the Community College Humanities Association.